CHICAGO - An annual report released this month by the Illinois Department of Transportation reveals that Illinois State Police troopers continued to ask motorists of color for permission to search their car without cause at a higher rate than white drivers during 2010. The report documents that the pattern identified by the ACLU of Illinois in its complaint recently filed with the U.S. Department of Justice continued in 2010. Hispanic motorists were 3.38 times more likely than Caucasian motorists to be asked for a consent search. African American motorists were nearly 3 times (2.96) more likely. And, as in the past, contraband was more frequently found in searches of white motorists.

The new IDOT report follows an administrative complaint filed by the American Civil Liberties Union of Illinois in June asking the U.S. Department of Justice to launch an investigation into the substantial racial disparate impact caused by consent searches conducted by Illinois State Police troopers of Hispanic and African American motorists. The data for 2010 is consistent with data collected and reported over the past several years by IDOT demonstrating that ISP troopers are more likely to ask Hispanic and African American motorists for consent to search their vehicles, but are more likely to find contraband when consent searching a car driven by a Caucasian motorist. A consent search occurs when a police officer does not have legally sufficient cause to require a search, yet nevertheless asks for permission to conduct a search. 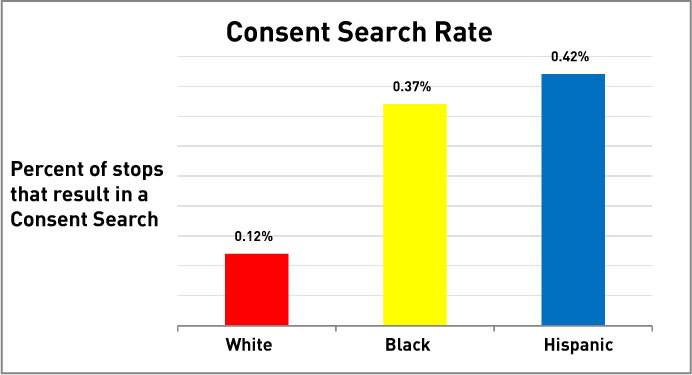 According to the Report mandated by the Illinois Traffic Stop Study Act – just released by the Illinois Department of Transportation – almost all motorists in 2010, between 94% and 97%, consent to a search when asked by an ISP trooper, suggesting that the coercive nature of the encounter renders the “consent” not truly voluntary.

“The State of Illinois has released another year of data that makes clear that consent searches by the ISP are conducted in a racially disparate manner,” said Harvey Grossman, legal director for the ACLU of Illinois. “This is not a one-year phenomenon. These results are consistent with data released each year since 2004. It is time for the political leadership in Illinois to act and end this practice on our highways and roads across the state.”

The IDOT report is the most recent presentation and analysis of data collected under the Illinois Traffic Stop Statistical Act of 2003 (originally championed by State Senator Barack Obama). The 2010 report also reveals that minorities statewide (based on more than 1,000 reporting law enforcement agencies) were twice as likely to be subjected to a consent search, but less likely to be found with contraband as a result of such a search.

Read the complete copy of the data released this week by IDOT.