It is almost impossible to capture the sense of celebration and joy that was present yesterday when Governor Pat Quinn signed into law Senate Bill 10, making Illinois the 16th state to recognize the freedom to marry. Perhaps no line better captured the spirit of the moment than one uttered by Illinois' Lt. Governor Sheila Simon: "It is time to stop planning rallies and start planning weddings!"

For me, the day was made complete as we were joined by four of our clients in the lawsuit seeking marriage in Illinois: Tim Kee and Rick Wade from near Marion; Michelle Mascaro and Corynne Romine of Oak Park; Danielle Cook and Suzie Hutton of Bloomington; and, Kirsten and Tanya Lyonsford -- along with their children, Andrea and Zach -- of Aurora.  To be able to share their joy and elation as their relationships were recognized with the dignity and full inclusion of marriage in our state was rewarding and fulfilling.

It also was an incredibly proud moment to be present when the key House sponsor Representative Greg Harris gave special credit to my colleagues Mary Dixon and Khadine Bennett, our irreplaceable lobby team in Springfield. Both contributed immensely to this victory. 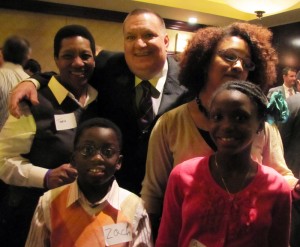 Getting to "yes" on marriage in Illinois has been arduous and, at times, frustrating. But yesterday made up for all of that. With the stroke of a pen, Governor Quinn pushed Illinois forward and made life better for thousands of gay and lesbian couples and their families all across the State. As I sat with Andrea and Zach Lyonsford, I also realized that life just got better for thousands and thousands of children across Illinois -- both children of gay and lesbian parents whose families are now fully recognized in our state, as well as gay, lesbian and questioning teens who can walk a little taller and realize that one day they will be able to marry the person they love.

In the end, the line that struck home for me yesterday was uttered by Chicago Mayor Rahm Emanuel, observed that Illinois no longer has "straight" marriage and "gay" marriage, it is just marriage. That is a good day for all Illinois residents.

Questions about the new marriage law? Read our FAQs.

Housing Discrimination Remains a Big Barrier for the LGBTQ+ Community

ACLU of Illinois Reacts to DCFS Testimony at Legislative Audit...