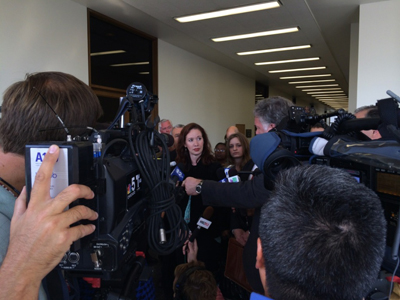 In another victory on the road to the freedom to marry for thousands of gay and lesbian couples and their families, Circuit Court of Cook County, Chancery Division today denied a motion to dismiss the two landmark cases seeking the freedom to marry for same-sex couples in Illinois, allowing plaintiffs' claims for violation of the fundamental right to marry, and for discrimination based on sexual orientation to go forward. Although the court dismissed the sex discrimination and other claims specific to the Illinois constitution, the plaintiffs can obtain everything they seek -- a declaration that the marriage ban is unconstitutional and an order requiring the state to issue marriage licenses to same-sex couples -- through the claims that remain. Lambda Legal and the American Civil Liberties Union of Illinois filed the cases in May of 2012. The decision today comes in response to a motion brought by interveners representing a number of downstate clerks defending the Illinois ban on marriage for gay and lesbian couples. These clerks intervened after Cook County Clerk David Orr and Attorney General Lisa Madigan refused to defend the statute. The downstate clerks had asked the court to dismiss the cases without any further exploration of the constitutional questions raised by the 25 plaintiff couples represented in the lawsuit. The court rejected that argument.

"We are pleased that the court saw that our couples have a right to their day in court on the merits of their claims for liberty and equality. Illinois' marriage ban not only brands these couples and their children as inferior under state law, but now that the federal law known as "DOMA" has been struck down by the Supreme Court, Illinois is the only thing standing between these families and full federal respect for their relationships," said Camilla Taylor, Marriage Project Director for Lambda Legal. "Loving same-sex couples in Illinois can't wait any longer for the freedom to marry. We're excited to get to the next step and make the case for equality."

"This ruling is a big step forward in putting an end to government-sanctioned discrimination against same-sex couples and their families in Illinois, but we must continue to push forward until loving lesbian and gay couples have the freedom to marry here in Illinois," said John Knight, Director of the LGBT Project at the ACLU of Illinois. "Same-sex couples and their children have been waiting far too long in Illinois for the freedom to marry, watching as state after state has recognized that lesbians and gay men should have the freedom to marry while Illinois continues to deny them the respect associated with marriage, as well as the full access to the federal protections and responsibilities."