On Wednesday, November 10th, the American Civil Liberties Union of Illinois will be inducted at the Chicago Gay and Lesbian Hall of Fame's 20th annual ceremony in recognition of "decades of support for the civil liberties of the LGBT community and persons living with HIV as well as advocacy of nondiscrimination laws covering sexual orientation, gender identity and HIV status."

The ACLU has a proud lineage in Chicago. Roger Baldwin founded the national organization in 1920, along with prominent Chicago activists Jane Addams, Duncan McDonald and Clarence Darrow. In 1926, the Chicago Civil Liberties Committee, the forerunner of the ACLU of Illinois, opened its offices on Washington Street. The Illinois affiliate was formally incorporated with the National ACLU in 1946. Some of the organization’s earliest cases involved police attacks on jobless demonstrators, raids on workers' halls, attacks on mixed sunbathing by blacks and whites in public parks, loyalty oaths for teachers and legislation which gagged the press. 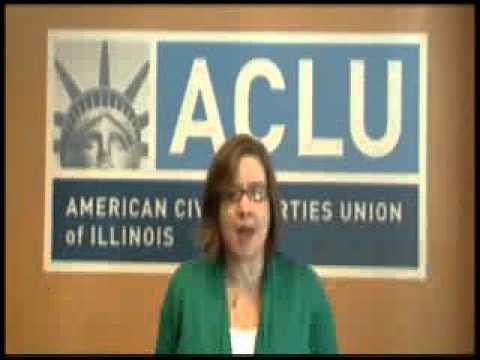 Over time, the organization recognized the need to broaden the scope of civil liberties defense in Illinois. Responding to that need, in 1968 the ACLU established the Roger Baldwin Foundation of ACLU, Inc. (RBF) to further develop legal and educational programs for the ACLU of Illinois. The RBF houses the LGBT & HIV Project, which fights to protect and secure rights for the LGBT community.

At the onset of the AIDS epidemic in the early 1980s, the ACLU led efforts in Illinois to ensure that the epidemic was treated as a public health crisis, and not a reason to discriminate against gay men and others with HIV/AIDS. In 1984, ACLU staff served on Illinois’ AIDS Interdisciplinary Council and acted as a primary author of the Illinois AIDS Confidentiality Act, the first law in the country to expressly protect the rights of individuals with HIV. The organization also litigated several early HIV cases, including one challenging the constitutionality of the Criminal Transmission of HIV law. In addition, the organization filed a suit challenging surreptitious HIV testing by doctors without patient consent. As the epidemic grew, the ACLU received numerous requests for legal assistance from HIV/AIDS-affected individuals denied jobs, evicted from their homes, barred from schools, and otherwise deprived of some of the basic necessities of life. Though the public hysteria surrounding HIV/AIDS has subsided in recent years, discrimination has not, and the ACLU continues to receive these kinds of complaints each year.

One recent legislative victory for the ACLU impacting both the LGBT community and individuals with HIV/AIDS is the change in state policy which prohibits discrimination by hospitals, doctors, dentists, psychologists, social workers, colleges and insurance companies. The ACLU successfully led an effort to amend the Illinois Human Rights Act to expand “place of public accommodation” protections, bringing Illinois law in line with that of the federal government and 39 other states. As a result, persons who are denied access to services offered to the public, such as medical care, now have a state remedy instead of just a federal one.

In addition, the ACLU worked in a coalition of organizations led by the AIDS Foundation of Chicago to pass legislation permitting expedited partner treatment for sexually transmitted infections- something the Centers for Disease Control and Prevention advocates, which Illinois law currently does not permit. Senate Bill 212 allows medical professionals to provide prescriptive medications to the sex partners of patients infected with gonorrhea and/or chlamydia that are delivered to the partners by the patient. The CDC recommends the use of expedited partner therapy to manage and prevent the transfer of sexually transmitted infections. Although the demographics of the HIV/AIDS crisis have changed over the years, the ACLU continues its work to ensure that it is treated as a public health issue and not a reason to discriminate against gay men.

While these recent legislative victories indicate progress on issues related to LGBT rights, it is important to remember Chicago’s shameful past. One of the ACLU’s earliest cases involving LGBT discrimination occurred in the late 1980s when it filed suit against the Northeastern Metropolitan Drug Enforcement Group (NEMEG) of the Chicago Police Department as a result of an illegal raid on Carol’s Speakeasy, a gay bar. Police subjected bar patrons to physical and verbal harassment, detained them for an unreasonable amount of time and forced them to provide private information and sign waiver of rights forms against their will for fear of physical harm.

This kind of injustice is a reality faced all too often by LGBT persons. The ACLU provides free legal advice or representation to hundreds of LGBT persons each year who are denied the most basic accommodations, including: employment, housing, educational opportunities, medical care, and custodial and visitation rights. In addition to legal advice, the ACLU also actively engages in public education efforts, including speaking engagements, letters to the editor, and media appearances to inform the LGBT community about their legal rights and the procedures for challenging discrimination when they encounter it. As a result, the organization is able to file groundbreaking lawsuits which not only impact Chicago’s LGBT community, but gays and lesbians nationwide.

One example is the ACLU’s successful challenge to the discriminatory policies of the Boy Scouts of America. In 1992, the ACLU filed suit against the City of Chicago, challenging its operation of Boy Scout youth programs that excluded people on the basis of their sexual orientation and religious belief. In 1996, the City agreed in a binding court order that it would no longer sponsor such programs as long as the Boy Scouts maintain policies that discriminate against gay men and lesbians. Just seven days later, the National Board of the Boy Scouts of America voted to change those very policies. In response to our lawsuit, for the first time the Boy Scouts opened their Explorer programs to lesbian and gay youth and adults across the country. These programs involve almost half a million youth nationwide. This typifies the precedent-setting litigation of the ACLU.

The following is a brief sampling of the ACLU’s current advocacy on behalf of the LGBT community:

The ACLU is one of the leading organizations lobbying in support of the Illinois Religious Freedom Protection & Civil Union Act, a bill before the state legislature to provide civil unions to all couples, including same-sex couples. The legislative staff contributes to day-to-day strategic decisions about how to move the bill forward. The ACLU underwrote and directed public opinion research (polling) in three key legislative districts and coordinated the dissemination of that information with the bill’s sponsors and other legislators. The organization also recruited individuals and couples in a number of key legislative districts to make personal visits to their members’ offices in the district and in Springfield.

Shortly after Illinois made sexual orientation discrimination illegal, we demanded and successfully persuaded all state universities to make their married student housing available to unmarried same-sex couples on the same basis as married couples.

DISCRIMINATION IN ADOPTION AND PARENTING

The ACLU successfully blocked a proposed bill that would amend the Child Care Act to allow religious institutions to be licensed as child welfare agencies and to adopt faith-based policies and practices relating to the placement of children for adoption that will allow them to give preference to prospective adoptive parents who hold the same religious beliefs as those held by that religious institution. This law could be used as a pretext to discriminate against lesbian and gay adoptive parents as has happened in the past with respect to racial minorities. The bill failed to pass out of committee, but it will likely be refiled next season.

The ACLU was co-counsel in the landmark case first recognizing lesbian and gay male couples’ ability to seek second-parent adoptions to protection their parental rights with their children. More recently, they have represented parents fighting for custody or visitation with their children in the face of the particular legal burdens that LGBT parents continue to encounter.

Since 1961, Illinois has allowed transgender individuals to change the gender marker on their birth certificate after undergoing an operation to reassign their sex. However, in recent years, the State of Illinois has made it much more difficult to correct this gender marker. One way in which the State made it more difficult for transgender individuals was its requirement starting in about 2004 that the surgeon who completed the gender confirmation surgery be licensed to practice medicine in the United States. The ACLU successfully challenged this discriminatory law and secured birth certificates for its clients.

In February 2009, the ACLU filed charges of sexual orientation, sex and race discrimination against a local large discount retail store where an African-American lesbian works as a part-time employee for several years. Soon after she began working at at the store, co-workers and managers discovered she was gay and began to use epithets to address her – on a daily basis. Co-workers also made graphic sexual comments about the woman and her partner. The Illinois Department of Human Rights issued findings in favor of the woman in early 2010.

DISCRIMINATION AGAINST THE HOMELESS

After a lesbian client was unjustly denied admission to one of Chicago’s homeless shelters, the ACLU intervened by filing a complaint with the Chicago Commission on Human Relations and the Illinois Department of Human Rights. Following the settlement agreement, the City of Chicago adopted comprehensive policies for its homeless shelters to ensure a safe and supportive environment for clients regardless of sexual orientation or gender identity.

ADVOCACY ON BEHALF OF LGBTQ YOUTH