CHICAGO – The American Civil Liberties Union and MergerWatch today released reports that reveal that one in six hospital beds in the United States is in a facility that complies with the Catholic Directives that prohibit a range of health care services even when a woman’s life or health is in jeopardy. In some states, more than 40 percent of all hospital beds are in a Catholic facility, leaving entire regions without any option for certain reproductive health care. In Illinois, according to the report, nearly 3 in 10 (29.5%) of hospital beds in the state operate under the limitations imposed by the Catholic Directives.

The ACLU’s report shares firsthand accounts from patients who have been denied appropriate care at Catholic hospitals, from health care providers forbidden from providing critical care because of the Directives, and from physicians at secular hospitals who have treated very sick women after they were turned away from a Catholic facility.

“When someone seeks medical care at a hospital, they expect that medical professionals will make decisions that are based on the patient’s best interest, not religious policies,” said Lorie Chaiten, Director of the Reproductive Rights Project at the ACLU of Illinois. “This report is a clarion call to all patients that their medical care – in the most critical of circumstances – may well be directed by religious leaders, not medical professionals.”

The Ethical and Religious Directives for Catholic Health Care Services, promulgated by the U.S. Conference of Catholic Bishops, set forth standards that are to govern at Catholic health care facilities. The Directives prohibit a range of reproductive health services, including contraception, sterilization, many infertility treatments, and abortion, even when a woman’s life or health is jeopardized by a pregnancy. Because of these rules, many Catholic hospitals across the country are withholding emergency care from patients who are in the midst of a miscarriage or experiencing other pregnancy complications.  Catholic hospitals also routinely prohibit doctors from performing tubal ligations (commonly known as “getting your tubes tied”) at the time of delivery, when the procedure is safest, leaving patients to undergo an additional surgery elsewhere after recovering from childbirth.  Catholic hospitals deny these essential health services despite receiving billions in taxpayer dollars.  Transgender and gender-non-conforming patients suffer the same and other similar harms when seeking reproductive health care. 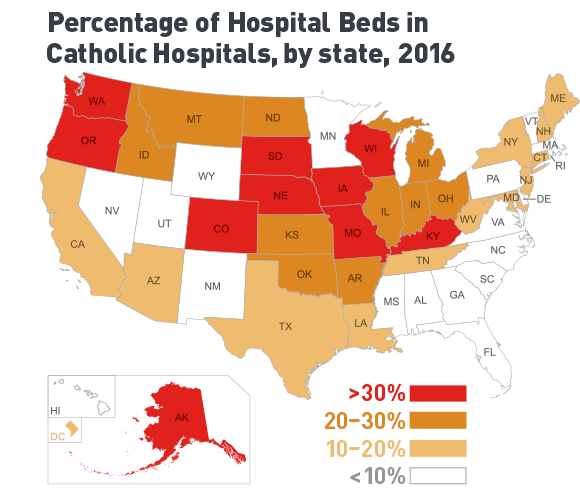 One of the stories featured in the report is that of Mindy Swank. After learning early in her second pregnancy that the fetus would not survive, Mindy’s local Illinois hospital (which operated under the Catholic directives) offered little information, and refused to complete a miscarriage after Mindy’s water had broken.  At risk of infection and hemorrhaging, Mindy was forced to return to the hospital multiple times over five weeks before the hospital induced labor.

“No one should have to go through what my family went through,” added Mindy. “I thought that hospitals were supposed to act to protect my health and privacy, not a religious position.”

Looking to new data from MergerWatch, the ACLU report finds:

“Their Hands are Tied”: Dr. Debra Stulberg on Religious...