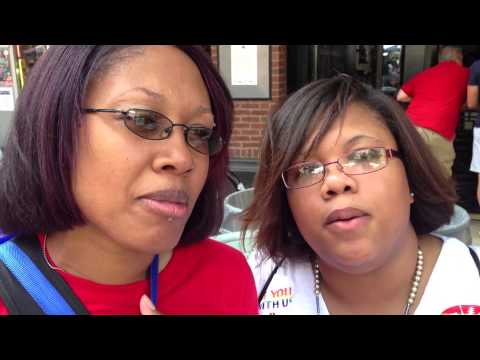 Illinois Unites for Marriage released a new campaign video today featuring the voices of average Chicagoans interviewed as part of the audience during the annual Bud Billiken parade, the oldest and largest African-American parade in the nation.  The video was distributed to supporters via social media and email, accompanied by calls for supporters to contact their legislators and to join in the effort to win the freedom to marry in Illinois.

The video captures a wide range of heartfelt messages from supporters of the freedom to marry, including observers who said, “everybody should have the same rights, every human being” and “equal rights should be respected for what it truly is.”

Senate Bill 10 – the Religious Freedom and Marriage Fairness Act – won overwhelming, bipartisan passage in the Illinois Senate in February and currently is awaiting action in the Illinois House of Representatives.  Since committed, same-sex couples still cannot marry in Illinois, they lack equal access to federal protections that strengthen and support families, protections now available to married couples after the Supreme Court’s ruling on the Defense of Marriage Act (DOMA.)  Illinois Unites is placing field organizers throughout the state to engage with voters who support the freedom to marry.

The video concludes with supporters urging Illinois to pass the freedom to marry now because “this is where we are, this is where we grew up, this where we should live and be a family.”
The coalition supporting the freedom to marry for all loving, committed couples – already strong with business, labor and community leaders, civic organizations, faith institutions and members of the clergy, African-American and Latino leaders, Republicans and Democrats – continues to grow.