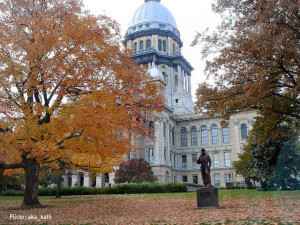 While much of the news out of Springfield this year was depressing – with a lack of agreement on a budget and an endless session – we saw advancements on a number of important civil liberties issues throughout the session.

Perhaps most important, the legislature responded to public outcry after events in Ferguson, Missouri, Baltimore and elsewhere, demanding more oversight and transparency of police. Late in the session, a bi-partisan group of legislators produced an omnibus policing bill that included significant input from the ACLU. The bill is complex, but has several important elements:

The legislation was a critical first step in policing reform across the state, and the ACLU plans to introduce bills in 2016 that include significant new reforms.

We also were happy to press for the passage of a measure – passed unanimously in both chambers – that addresses local ordinances that were negatively affecting survivors of domestic and sexual violence as well as those with disabilities. In recent years, more than 100 municipalities across Illinois have adopted so-called nuisance or crime-free ordinances. Under many of these local laws, a resident could be threatened with eviction if they phoned the police for help on a number of occasions over a designated period.

The folly of this is self-evident: if a woman is repeatedly abused by a partner or former partner, she should not be forced to choose between calling the police to protect herself or risk being evicted from her home, perhaps a home that she shares with her children.

The ACLU is working with communities around the State to bring their local laws into compliance with the state law, barring enforcement of these laws that do not have protections for survivors of sexual and domestic violence and those with disabilities.

Next: Parody is Protected