Parody has a long, honored history. Satire programs such as Saturday Night Live regularly parody political figures and others. Today, that satire has moved online, including Twitter. Most publicly-recognized persons simply accept that being noteworthy is going to draw some critique.

Not so for the Mayor of Peoria. When a Peoria resident created a parody Twitter account, @peoriamayor, and began sending out tweets to his friends, the Mayor took notice. To be sure, some of the tweets were profane, others ludicrous and some were just silly. In short, no one who knew Mayor Jim Ardis of Peoria could ever have believed that the messages were coming from him. 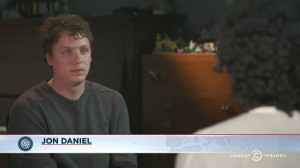 Jon Daniel being interviewed by Jessica Williams on the Daily Show

So, one might think that he would ignore this, or perhaps launch his own Twitter account in order to combat this parody. Instead, the Mayor did what you might think is the least likely outcome – he demanded that law enforcement officials launch a full-scale police investigation, and a manhunt, to find Jon Daniel, the author of the account.

Ultimately, Mr. Daniel was arrested, his home was raided and his computer equipment and his phone was seized. It was almost unbelievable that police could have thought this was a responsible thing to do.

The ACLU filed a lawsuit on Mr. Daniel’s behalf, noting that the leaders of Peoria “needed a lessons in civics.” That lawsuit was settled this year.

The settlement was nothing short of a victory. But that was not the end of this issue. In September, the Daily Show did a feature on the case, pointing out the ludicrous response of the Mayor to the tweets from Mr. Daniel. The program also featured an extensive interview with our client and highlighted his plight in this matter.

We never thought a case like this would happen. But we hope that the attention to this makes clear to elected officials everywhere the folly of trying to use police resources against satire and parody.