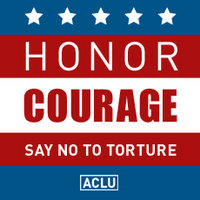 To mark the seventh anniversary of the publication of photographs that exposed torture and abuse at Abu Ghraib prison, the New York Times published an ACLU/PEN American Center op-ed today honoring those who stood up against the torture policies of the Bush administration. In the introduction, Jameel Jaffer and Larry Siems write about Sergeant Joe Darby, as well as the many other Americans, known and unknown, who stood up against the Bush administration’s torture policies:

In January 2004, Spec. Joseph M. Darby, a 24-year-old Army reservist in Iraq, discovered a set of photographs showing other members of his company torturing prisoners at the Abu Ghraib prison. The discovery anguished him, and he struggled over how to respond. “I had the choice between what I knew was morally right, and my loyalty to other soldiers,” he recalled later. “I couldn’t have it both ways.”

So he copied the photographs onto a CD, sealed it in an envelope, and delivered the envelope and an anonymous letter to the Army’s Criminal Investigation Command. Three months later — seven years ago today — the photographs were published. Specialist Darby soon found himself the target of death threats, but he had no regrets. Testifying at a pretrial hearing for a fellow soldier, he said that the abuse “violated everything I personally believed in and all I’d been taught about the rules of war.”

He was not alone. Throughout the military, and throughout the government, brave men and women reported abuse, challenged interrogation directives that permitted abuse, and refused to participate in an interrogation and detention program that they believed to be unwise, unlawful and immoral. The Bush administration’s most senior officials expressly approved the torture of prisoners, but there was dissent in every agency, and at every level.

There are many things the Obama administration could do to repair some of the damage done by the last administration, but among the simplest and most urgent is this: It could recognize and honor the public servants who rejected torture.

The Bush administration repeatedly honored those who approved torture, but the Obama administration should honor those — like Joe Darby — who rejected it. You can send your own personal message of thanks to the American heroes who stood up against torture, and have copies of those messages sent to President Obama.

For every Joe Darby, we know that there are countless other American heroes who opposed policies of torture and abuse whose names we do not know. To honor the best of America, we are asking you to share your stories of how you or someone you know stood up to oppose torture or abuse.

(Originally posted on the Blog of Rights.)

Looking Forward to International Visits from Friends and Family in...

Losing the War Against ISIS – Turning a Deaf Ear to Sun Tzu and...

What Crack Cocaine Teaches Us About NSA Reform