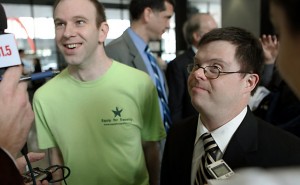 According to Chicago Breaking News, U.S. District Court Judge James Holderman approved a settlement today, paving the way for adults with developmental disabilities to move out of large institutions and into smaller community based settings. They write:

A federal judge on Wednesday approved a settlement to a long-running civil case that will force Illinois to begin moving hundreds of people with developmental and intellectual disabilities into more community-based homes and apartments of their choice.

“I firmly believe that the state of Illinois, the citizens, have been well-served by these efforts,” said U.S. District Judge James Holderman, who congratulated lawyers who have spent months negotiating terms of controversial case.

“I will issue an order promptly,” he said, noting that he had received only two objections out of 21Ö responses filed with the court. “I will announce informally today that my position is that the consent decree should be approved and this should be the law that is followed.”
....
Ligas, 43, who has Down’s syndrome, will be able to move out of his current 96-bed home at Sheltered Village in Woodstock within 60 days. The state has 90 days to complete its first draft of a transition plan to move hundreds of non-plaintiffs who are covered under the decree, according to the document.

“I am so happy today,” said Ligas, who planned to celebrate at Jimmy Johns. “My family, too.”

Update in Case to Protect People with Developmental Disabilities

Federal Judge Orders Specific Schedule for Illinois to Pay for...