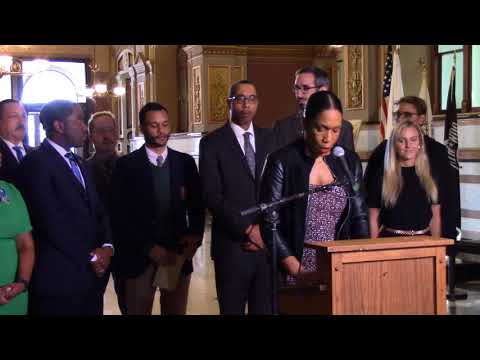 “Right now, many Illinoisans awaiting trial don’t have the information that lets them know their voting rights or have the access to exercise that right. This confusion around voting in jails, and their rights post release, affects thousands of individuals in communities throughout the Illinois. This bill will help fill in those education gaps and expand access to voting across our state,” said State Rep. Juliana Stratton.

Currently, the Illinois laws for voting in jail are ambiguous and the ability of incarcerated people to vote varies widely between jails across our state. Many of the 20,000 people who are being detained before their trials do not have access to vote. Of the almost 4 million people who have a past felony conviction in the state, many do not know that they are eligible to vote.

HB 4469 would direct county jails and election officials to establish a process that allows detainees awaiting trial to cast their ballots during elections. Additionally, counties with a population over 3 million would be able to establish a temporary polling place in county jails. HB 4469 would also direct county jails to provide a voter registration application to any person in custody eligible to vote. For those being released (including parole and probation), they would be notified that that their voting rights have been restored and provided with an updated registration form.

“If Illinois citizens with records don’t know their rights, they are much less likely to exercise those rights. Many are told, or incorrectly believe, that they simply have lost the right to vote for life.  We’ve heard from citizens who have had a range of interactions with the criminal justice system, from arrest to incarceration, who didn’t realize that they could still participate in the democratic process - from signing a petition to get a candidate on the ballot, to registering to vote, to actually voting.  We are here to correct those misconceptions and work together to expand the right to vote for all who are eligible,” said Khadine Bennett, Advocacy and Intergovernmental Affairs Director, ACLU of Illinois.

"Voting is a fundamental right that all citizens should be informed of. Individuals detained in jail pretrial retain this fundamental right and therefore should be accommodated." said Michelle Mbekeani-Wiley the Community Justice Staff Attorney at the Sargent Shriver National Center on Poverty Law. "It is critical to have all populations engaged in the democratic process. This piece of legislation will ignite a large voting bloc in this state, people with criminal records, by increasing their access to the ballot."

“When I was released from prison I had no idea that I had the right to vote. I was told that people with felonies can’t vote in elections. I missed out on so many opportunities to have an impact with my vote. It is so important to let people like me know that they have a voice in this state with their vote,” said Colleen Brinkmeier, a voter from Rockford.