A petition signed by 500 supporters of the ACLU's call for a moratorium on the placement of new surveillance cameras was mailed to Chicago mayoral candidates this afternoon. 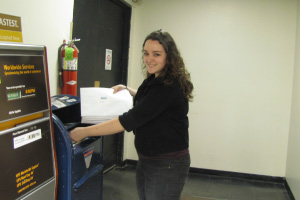 Recently the ACLU of Illinois released a comprehensive report on the extensive and integrated surveillance camera system in Chicago. The surveillance system has been expanded in recent years with little community input and insufficient guidelines to protect privacy in the City.

I urge you to adopt the ACLU's call for a moratorium on the placement of new cameras in Chicago until a full review has been completed, including ample opportunity for community input and consideration of whether to remove some cameras.

Also, surveillance cameras should not be used without new privacy guidelines.

Whichever candidate wins next Tuesday's election, let's hope they heed the calls for a moratorium on new cameras, an open and thorough review of the camera surveillance system and stronger regulation of existing cameras.