2013: A harmful year for reproductive health

The Guttmacher Institute just released data showing a startling trend: more laws were enacted to restrict abortion in the past three years than there have been in the entire decade. The report illustrates a nationwide shift creating significant barriers to reproductive health resources even in the past year alone. Indeed, 2013 proved to be second only to 2011, as the year the highest number of abortion restrictions were created -- ever. This grim analysis, while it may not be hopeful at first glance, calls on the reproductive justice community to roll up its proverbial sleeves as we move ahead into 2014. 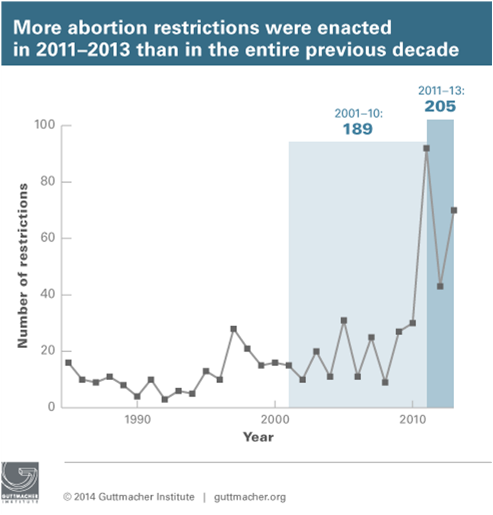 The spike evidenced in the chart above, is a result of several factors. For one, several states didn't have legislative sessions in 2012, and also, the elections brought more anti-abortion lawmakers to the table in 2013. Perhaps the most troubling statistics gleaned from the report are the ones that show an increase in the number of states that have converted to what Guttmacher deems "hostile" to abortion rights. This category is defined by a state that has four or more types of major abortion restrictions on the books. But what this means is that a majority of women now live in states with numerous laws restricting abortion, as illustrated below: 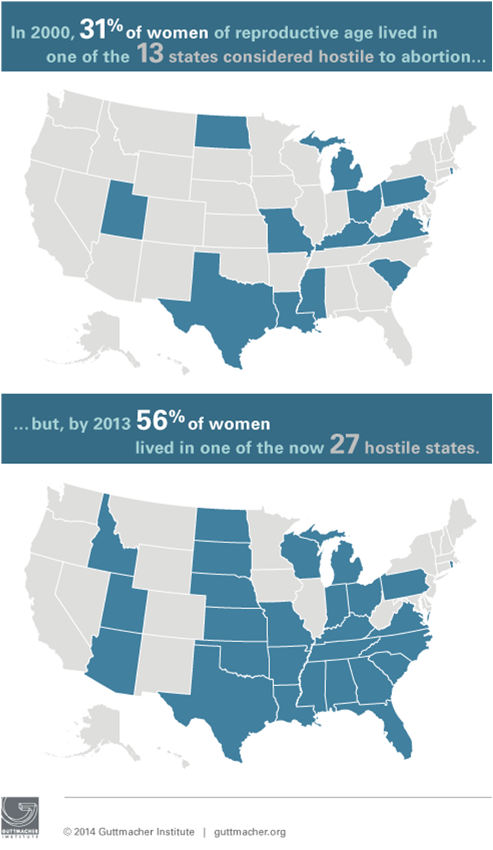 The four types of abortion restrictions referenced in the report are: abortion bans, restrictions on abortion providers, limitations on the provision of medication abortion and restrictions on coverage of abortion in private health plans. Illinois experienced a huge blow in a different realm of abortion restriction. In July, the Illinois Supreme Court upheld the Parental Notice of Abortion Act, which now requires minors seeking an abortion to have an adult family member be notified 48 hours before the procedure takes place. The ACLU of Illinois responded by creating the Illinois Judicial Bypass Coordination Project, which includes a hotline for minors seeking abortion which provides information about Illinois’ parental notice law and connects young women with a free attorney if they need one.

But let's not be discouraged by this re-cap, as 2013 also brought us a lot to be hopeful for! Illinois celebrated a major legislative victory for the reproductive justice movement this year by passing the Sexual Health Education Bill, which will require public schools across the state to provide sexual health information that is comprehensive, medically-accurate, and age-appropriate. That means, young women in Illinois will learn about contraception as a reproductive health option in addition to learning about abstinence.  The new law will provide a breadth of information where there was previously a limited view of the sexual and reproductive health options out there for young Illinois women.