CHICAGO – With the stroke of his pen, Illinois Governor Pat Quinn today ended the embarrassment caused the state by a broken, dysfunctional and dangerous death penalty system -- a system that had seen 20 men exonerated and released over the past several years. Governor Quinn's action today comes little more than eleven years after then-Governor George Ryan first placed a moratorium on executions in Illinois after he became convinced that the system was flawed and risked executing an innocent person. The measure signed today, Senate Bill 3539, was adopted by the Illinois General Assembly in December after more than a decade of debate, discussion and analysis of Illinois' system of capital punishment. 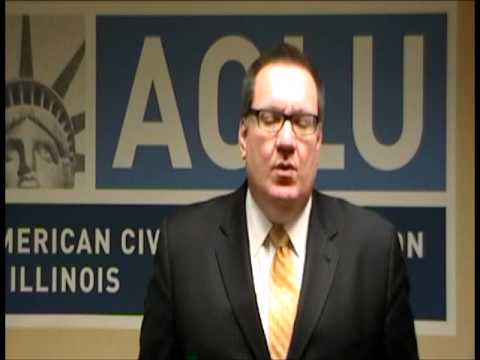 "We thank Governor Quinn for taking the final step to end this irretrievably broken system," said Colleen K. Connell, executive director of the American Civil Liberties Union of Illinois. "But this action is really the result of tremendous study and advocacy -- by members of the bar, law enforcement, victims' families and residents across Illinois -- who made this historic day possible."

Senate Bill 3539 ends the death penalty as an option in Illinois, replacing the penalty with natural life in prison. Many of the legislators who supported the measure in the Illinois House and the Illinois Senate noted that many persons consider life in prison to be a very harsh substitute, while still allowing the State to correct errors if new evidence is uncovered. The legislation was shepherded through the House by State Representative Karen Yarbrough and in the Senate by Senator Kwame Raoul of Chicago.

"By repealing the death penalty, Gov. Quinn and the Illinois legislature have taken an historic stand against the systemic injustices that plague the entire death penalty system in Illinois and the rest of the United States," said John Holdridge, Director of the ACLU Capital Punishment Project. "Executions in this country are carried out as part of an unequal system of justice, in which too often innocent people are sentenced to death and decisions about who lives and who dies are largely dependent upon the skill of their attorneys, the race of their victim, their socioeconomic status and where the crime took place. Such arbitrary and discriminatory administration of the death penalty, which comes at a huge financial cost to taxpayers, is the very definition of a failed system, and the state of Illinois is to be commended for ending it."

ACLU of Oklahoma’s Statement in Response to Tuesday Night’s Botched...

Statement on Reinstatement of the Death Penalty in Illinois

It takes courage to correct injustice