One reality for the ACLU is that our work is never done. Each victory almost always reveals new challenges. As we celebrated the victory nationally of the freedom to marry this year, we have redoubled our efforts to protect people who are transgender from discrimination and harm.

The ACLU of Illinois saw two big victories in this area during 2015.

In August, the City of Chicago responded to prodding from the ACLU by changing its policy regarding medical coverage for employees who are transgender. Under the policy change, coverage of male-to-female or female-to-male surgical procedures would be standard for city employees and their dependents covered by city health care plans. The city is in the process of finalizing the specific criteria regarding coverage.

The change, which came after the ACLU advocated to the City on behalf of an employee denied coverage, made Chicago the largest city in America to provide this critical and medically-necessary coverage. 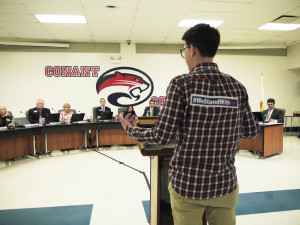 We saw another critical victory when the U.S. Department of Education, Office of Civil Rights (OCR), ruled in favor of a female suburban high school student who is transgender after she was denied access to an appropriate locker room for gym class and the sports team on which she participates.

The decision by the OCR is a critical step forward for students who are transgender. Experts, medical and therapeutic, report that the transition of young people is aided significantly when their core identity is recognized and acknowledged. That cannot happen when these students are singled out and separated from other students. Indeed, this sort of separation only encourages the sort of violence and harassment that is faced by far too many students who are transgender.

In response to the OCR decision, the school district – Township District 211 – launched a very cynical, corrosive public relations campaign, sowing fear in their community by talking about students disrobing – even though the OCR found that students do not disrobe in the locker room. Fortunately, editorials in the Chicago Tribune and the Washington Post, saw through these tactics and supported the OCR’s decision.

The OCR and the District now have reached a settlement that is being implemented.

This public discourse underscores an important reason for our advocacy in this area – even in the sensitive area of bathroom access. Only by raising and discussing these issues that can we advance public understanding about what it means to be transgender and the challenges experienced by those who are transgender. This is a long battle, but it is one we are committed to winning.

Previous: Resisting Discrimination Based on Religion