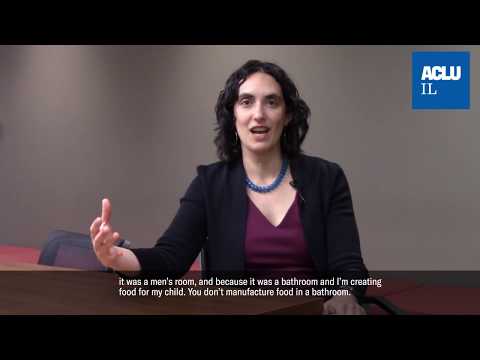 One way or another, most of us will end up visiting a courthouse at some point in our lives. We may be there for jury duty, as part of a legal case, or to support a loved one. Courthouse doors should be open to all – but currently, that’s not the case in Illinois.

Parents who need to pump breastmilk too often find themselves without a space to do so in Illinois courthouses – or perhaps even worse, directed to go into the bathroom to pump. Imagine reporting for jury duty and then being told you need to prepare your child’s next meal on the toilet. Parents know: pumping needs to be done in a clean environment to reduce the risk of contamination.

Parents should not be denied access to the judicial system or the opportunity to participate fully in civic life just because the courthouse building doesn’t have a private and sanitary space a person can access in order to pump breastmilk. Unfortunately, too many courthouses still lack basic pumping accommodations across our state.

In 2018, the ACLU of Illinois successfully advocated for passage of a new state law requiring that a private space outside of a restroom be available for members of the public to express breastmilk in all Illinois Circuit Court county courthouses. This past summer, we undertook to assess how courthouses in some of the largest counties throughout the state were doing in terms of complying with this law and making lactation accommodations accessible for the public.

This week, we released a new report with the results of this study, which shows that the availability of private, non-restroom lactation space for court visitors remains decidedly mixed, even after the passage of the statewide law last year.

A number of courthouses were in near or full compliance with the law and were implementing practices to ensure that members of the public can learn about and access lactation spaces. But disappointingly, in about 15% of the courthouses we contacted, we were told either that the designated lactation space was in a restroom or a person would be directed to the restroom in the absence of another designated space.

Since the report’s release, we heard from a number of courthouses that they do in fact have a designated lactation space outside the restroom, contrary to what was told to us by their staff during our survey. While it is good that these accommodations exist, these discrepancies underscore exactly why it is so critical that all court personnel are educated about the existence of lactation space and the procedures for access. It is not enough to simply identify a lactation space in court – parents must be able to actually access that space when they need it.

Our client Judith Miller knows all too well the frustration and harm that can result when a courthouse does not make appropriate lactation accommodations available. When Ms. Miller reported for jury duty at the Circuit Court of Cook County in Chicago, she sought access to a lactation space that was advertised on the Court’s website. However, over the course of several hours, she was unable to reach anyone who could let her into the locked lactation room. The only alternative option offered to her for pumping was to use a men’s restroom. Ultimately, Ms. Miller had to leave the courthouse and was prevented from serving her jury duty. We spoke with Ms. Miller about her experience for the short video above.

To prevent this kind of problem in the future, the ACLU of Illinois has also created a checklist of best practices that courthouses should follow to ensure that their policies and practices regarding lactation space access are workable and effective. No parent should have to choose between civic engagement and breastfeeding their baby. We urge courthouses across Illinois to use this checklist to make sure they are following the law and have a designated space ready at all times for parents to access.