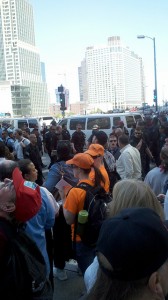 The photos and video over the past few days in Chicago have been remarkable -- from the Irving Park on the North side, to Chicago's iconic Daley Plaza to the far South Loop, demonstrators have gathered in concert with the NATO summit to express their views on a host of local, national and international public policy issues.   In most of the photos and videos, there are a group of people keeping a watchful eye, clad in bright orange t-shirts and hats. These folks are not fans who have wandered away from a University of Illinois, Urbana-Champaign football or basketball game (the school's colors are bright orange and blue).

These "standouts" with the demonstrators are ACLU observers, a group of volunteer lawyers and law students from across the Chicago area who gave their time this weekend to insure that free speech and free expression is respected during the protests. Words do not capture the depth of appreciation that we feel for the work, the energy and the sheer joy that volunteers bring to this project.   Friday night, after a long afternoon, a group of the orange-clad lawyers stood on the corner of Michigan and Jackson watching Occupy Chicago's General Assembly. Even though it was late - and many of these folks already had worked a full day in the office -- they smiled happily, spoke with protestors and passersby and generally had a great time.On Saturday, a group of ACLU observers, led by our executive director Colleen Connell, followed the demonstration for healthcare as it wound its way through the Irving Park neighborhood and (twice) past the home of Chicago Mayor Rahm Emanuel.  One volunteer finally had to leave because she had blisters on her feet that no longer were tolerable. 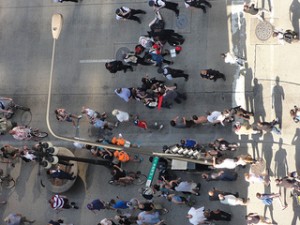 Another group of ACLU observers spent late Saturday afternoon and into the evening following various groups of protestors as they made their way back and forth, up and down, across Chicago's Loop.  Most were hot, tired and had sore feet, but when they returned to our offices in the evening, there remained a senses of fervent energy and commitment to the work that is being done this weekend.

We believe that these ACLU Observers are making a difference.  Our colleagues in other cities that have hosted these events tell us that the presence of clearly-marked Observers (hence, the orange) often moderate police behaviors, making free expression more widely available.  Additionally, the presence of the observers mean that we have a direct record and knowledge of what is happening on the streets without relying on second or third hand reports. 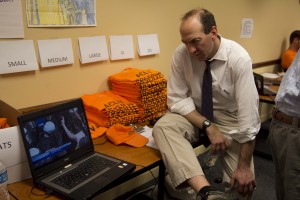 In addition to our ACLU Observers in the orange shirts, we have a smaller group of lawyers in business casual dress who are out with the Observers.  These lawyers are prepared to communicate with lawyers for the City of Chicago and the police in order to directly address situations as they arise on the streets.   And, we have had a group of Free Speech volunteers out in force this weekend, sharing information about our "Know Your Rights" materials and other materials.

We are pleased and proud of the presence that the ACLU has had on the streets of Chicago this weekend.  It also is obvious that we could not have this impact without the devotion and time of volunteers, especially the volunteers who have been out on the streets for us.  There has been an enormous amount of free speech with multiple messages across Chicago during these days.   Assuring that speech was the point of all this work.  We thank our volunteers for making this happen.