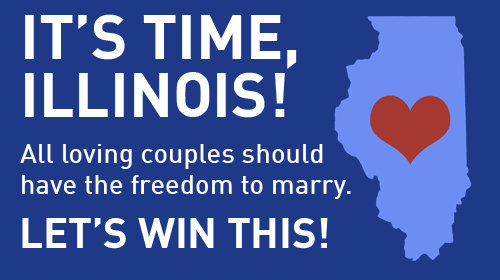 Yesterday, Minnesota became the 12th state in the country to approve a law allowing same-sex couples to marry. This comes on the heels of Rhode Island and Delaware approving freedom to marry laws in the last two weeks, and historic victories at the ballot box in Maine, Maryland, and Washington last November. Momentum is building across the country, and Illinois is poised to become the fourth state this month to affirm the dignity of all committed couples.

But the Illinois House must act before it adjourns on May 31: the Illinois Senate passed the Religious Freedom and Marriage Fairness Act on Valentine's Day, and Governor Pat Quinn has promised to sign it into law. The freedom to marry is breaking out across the country – in order to keep the momentum going so that we can win recognition for all loving and committed couples throughout the country, we need to tell the Illinois House of Representatives to act now.

Tanya Lazaro and Elizabeth Matos and their two young children, Jaiden and Sophia, are one of the thousands of Illinois families who are counting on the House to approve the marriage bill, so they can finally have the recognition and protection that comes only with marriage. Tanya is a Detective in the Violent Crimes Unit of the Chicago Police Department – she risks her life serving and protecting the people of Chicago, and yet Illinois does not fully recognize her relationship with Elizabeth and the family they have built. Tanya says, "We love each other; we are committed to one another – anything short of marriage just does not recognize that love and commitment."

Another Illinois couple, Ed Hamilton and Gary Magruder, have been together for 49 years and were married in Canada in 2004. For Ed, 75, and Gary, 70, having their marriage recognized will ensure that they are able to care for each other for the duration of their lives and protect the surviving spouse after one passes on. Most of all, they simply want to spend their "golden years" recognized as married in their home state of Illinois.

The importance of this vote also extends well beyond the borders of Illinois: next month, the United States Supreme Court will issue its rulings in two landmark cases for LGBT equality, including the ACLU's challenge to the discriminatory Defense of Marriage Act on behalf of Edie Windsor. In deciding these cases, one factor that could make a difference to the Court is where the country is on this issue. Public opinion polls have consistently shown that a majority of Americans now support marriage for same-sex couples, and Illinois becoming the seventh state to approve the freedom to marry in as many months will send a powerful signal to the Court that the country is ready for equality.

So please join Tanya and Elizabeth, and Ed and Gary – and the hundreds of thousands of loving and committed same-sex couples across the country – and tell the Illinois House that the time is now to be on the right side of history.

Cross-posted from the Blog of Rights.