Championing 4,000 At-Risk Kids by Standing Up for Greg & Stillman 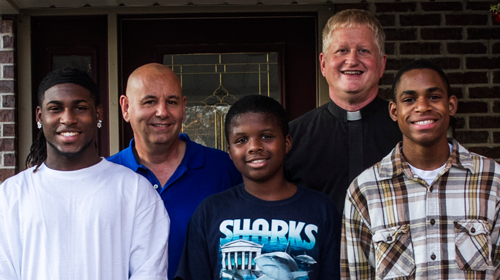 Greg and Stillman Stewart have a knack for nurturing children with serious needs. The two men have been together for over 30 years and are parents to five children that they adopted out of the California foster care system. Most of the kids came to them after suffering years of abuse and multiple foster home placements. When one of their children first came to live with them, at five years old, he was still in diapers, didn't know how to use utensils, and suffered from severe speech impediments. By 17, he brought home a report card with all As and one B. Another child, who had been through 17 foster home placements and three failed adoptions in three different states, is now a college sophomore.

The whole family moved to Lincoln, Nebraska in 2011, when Greg, a United Church of Christ minister, took a position at First-Plymouth Congregational Church there. As their kids have grown and some have moved out of the house (their youngest is 13, their oldest 20), Greg and Stillman realized they wanted to open their home to more children in need. When they applied for a foster parent license in Nebraska, however, they were turned away because they're gay men.

Nebraska bars gay people from being foster parents and also bars any unmarried couple that lives together from being foster parents. Since Nebraska screens all foster care applicants by doing a home study, checking for criminal history or past child abuse, reviewing medical and mental health records, and evaluating the family's stability and ability to care for children, this ban simply means that Nebraska is kicking out lesbians and gay men who would pass the regular foster parent screening. And it's depriving kids in the Nebraska foster care system (there are 3,854 children in that system now, 48 percent of whom have been there for more than a year) of what could be just the home they need. After all, there aren't many foster parent applicants with a record like Greg and Stillman's.

Today the ACLU filed a constitutional challenge, on behalf of three couples to Nebraska's ban on foster parenting by gay people. Since the state requires parents seeking to adopt kids out of state custody to be licensed as foster parents first, the rule also effectively bans lesbians and gay men from adopting children out of the foster care system.

ACLU lawsuits have gotten rid of similar bans on adoption or foster parenting by gay people in Arkansas, Florida, and Missouri. Nebraska is one of just three states that still have some kind of ban on foster parenting or adoptions by gay people (Utah and Mississippi are the other two), and we're aiming to get to zero, starting with Nebraska.

Besides leaving some kids in group homes and emergency shelters rather than in the care of loving families, this law reinforces baseless stereotypes about gay people as parents. This case provides us the opportunity to show the court, and the country, that kids raised by lesbians and gay men do just as well as kids raised by straight parents, and that all those ugly stereotypes have no basis in reality. With the story of Greg and Stillman and their children, we're confident we can show just how misguided the Nebraska ban is.