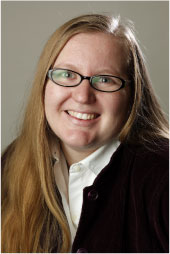 Advocacy & Outreach Director Allie Carter is responsible for developing and implementing field strategies in support of the ACLU’s legislative, legal and public education priorities, with particular emphasis on the areas of national security, reproductive justice and LGBT rights, as well as managing email communications with supporters and online advocacy. She joined the ACLU in 2006, serving for two years as the Project Manager for Equal Marriage Illinois and directing 2004’s Fair Illinois effort which successfully challenged a proposed anti-gay marriage referendum. Allie served for three years as a community organizer in the Peace Corps in Burkina Faso, West Africa. She also worked as a field organizer on Oregon’s successful 1999 “No on 9″ campaign, which defeated an anti-gay rights constitutional amendment.

Allie is also the webmistress for aclu-il.org and other ACLU of Illinois websites. She is a graduate of Yale University.